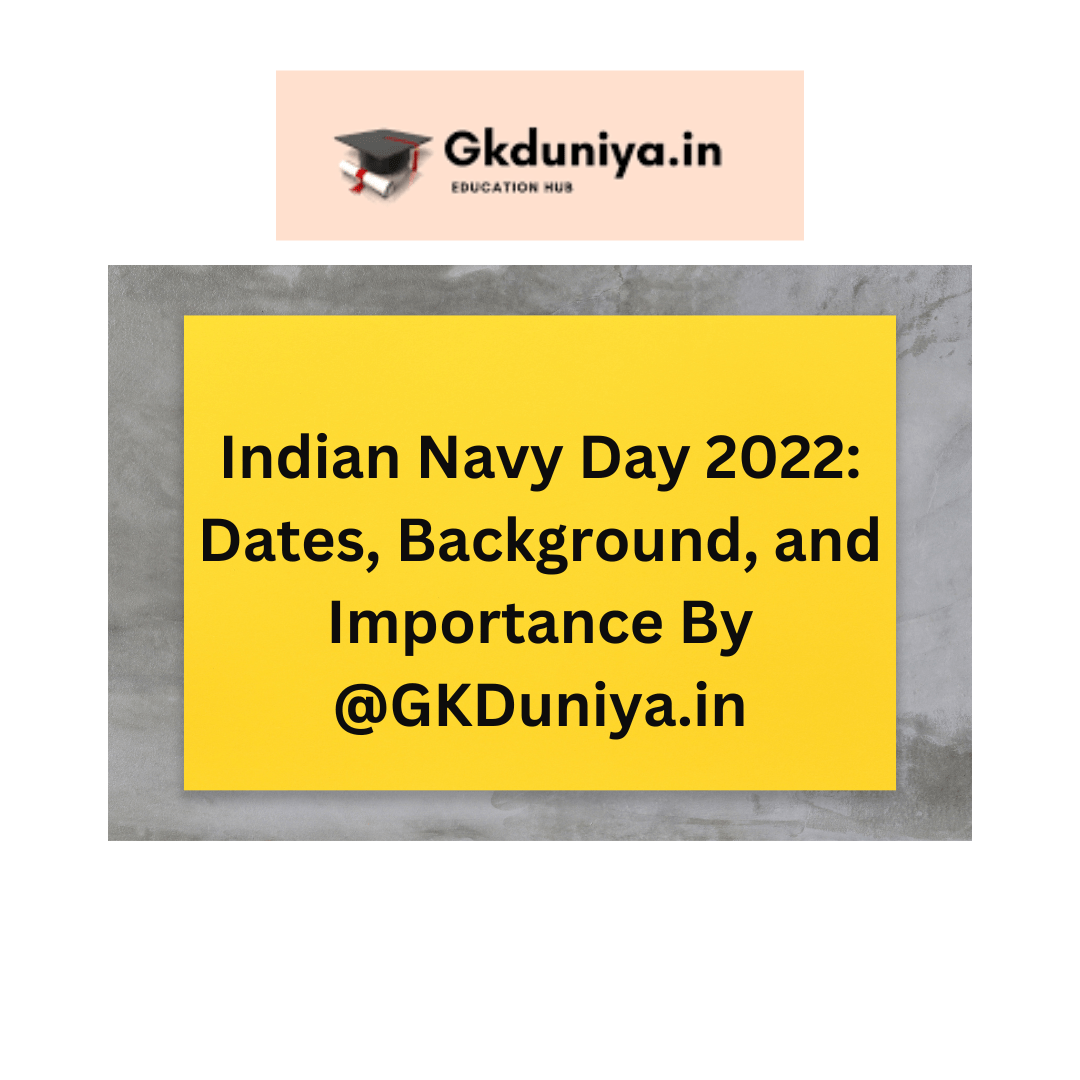 Indian Navy Day 2022:– On December 4 of each year, Indian Navy Day is observed to recognize the contributions and accomplishments of Indian naval forces. In addition, the day is observed in honor of the 1971 start of Operation Trident against Pakistan during the Indo-Pakistan War.

Throughout the war, the Indian Navy played a crucial role. Indian Navy Day is observed to remember the attack and to honor all Navy personnel who gave their lives for their country.

In order to safeguard our nation’s interests, the Indian Navy is a three-dimensional force that operates above, on, and below the ocean’s surface. Its primary objective is to improve the situation in the Indian Ocean Zone. Every year, a variety of events with varying themes are held on this day.

Indian Navy Day is observed annually on December 4 to honor the Indian Navy’s efforts and contribution to the 1971 Indo-Pakistan war’s Operation Trident.

Indian Naval force Day History – For what reason is the Day Celebrated?

Do you know when the Indian Navy was established? The East India Company established it in 1612.Pakistan attacked Indian air bases on December 3 during the 1971 Indo-Pak War. The Indian Navy planned an attack on Pakistan on December 4 and 5, as Pakistan lacked the bombing aircraft, as a response to their offensive attacks.

During Operation Trident, the Pakistan Naval Headquarters in Karachi was targeted by the Indian Navy. It sank three Pakistani Navy ships, including the PNS Khaibar, and launched three missile boats—INS Veer, INS Nipat, and INS Nirghat—in the direction of Karachi. It also launched boats of the Vidyut class. During the attack, hundreds of Pakistani Navy personnel were killed. The Indian Navy’s entire operation was managed by Commodore Kasargod Pattanashetti Gopal Rao.

Importance At the Senior Naval Officer’s Conference in May 1972, it was decided to celebrate Indian Navy Day on December 4 to honor the Indian Navy’s efforts and accomplishments during the 1971 Indo-Pak war.

It is essential to educate Indian citizens and children about India’s significance and victory. The purpose of celebrating Indian Navy Day is to raise public awareness of the Navy.

Indian Navy Day 2022 commemorates the Indian Naval Missile Boats’ victory in Karachi during Operation Trident. The Indian Naval’s warships and aircraft can be seen by the general public at the Naval Festival on this day. Additionally, the Ernakulum journalists organize the festival’s Military Photo Exhibition.

In addition, from November 24 to 26, the Naval Institute of Aeronautical Technology (NIAT) organizes a community service event at the Good Hope Old Age Home in Fort Karachi. During this event, students entertain naval doctors with games and other activities. The Navy Festival also   hosts numerous contests, including the Navy Ball and Navy Queen.

Each year, a new theme is suggested to commemorate Indian Navy Dayy. In order to commemorate the 50th anniversary of India’s victory in the Indo-Pakistan war in 1971, the theme of Indian Navy Day 2022 is “Swarnim Vijay Varsh.”Last year, the subject was “Indian Naval force Battle Prepared, Solid and Durable”.

The Western Naval Command of the Indian Navy, headquartered in Mumbai, commemorates the devastating attack on Pakistan’s naval base on December 4 by bringing their ships and sailors together. The Eastern Naval Command also organizes a variety of activities and events at Visakhapatnam. It begins with a wreath-laying function at the conflict remembrance and is trailed by an exhibition to show the abilities of the maritime submarines, boats, airplane, and different powers.

Ships are open to the public and students during the week of Indian Navy Day, as are open sea swimming competitions, Indian Navy inter-school quiz competitions, veteran mariners lunch, performances by the Naval Symphonic Orchestra, a tattoo ceremony, and many other activities. On Navy Day, people also share quotes on social media.

Through seaport visits, investments, disaster relief, and many other activities, the Indian Navy plays a crucial role in protecting the nation’s maritime borders and improving India’s relations with other countries. In order to strengthen its position in the Indian Ocean, the Indian Navy has undergone recent transformations. At the Gateway of India, a number of cultural events are held to highlight the significance of the Indian Navy on this day.

The Indian Navy Day 2022 theme for this year is “Swarnim Vijay Varsha.”

2.Who is the Indian Navy’s founder?

Chatrapati Shivaji Maharaj, the Maratha emperor, is regarded as the Indian Navy’s father.

3.What is the purpose of the Indian Navy?

“Sam no Varunah,” which means that Varna, the God of Water, brings us luck, is the motivation of the India Navy.