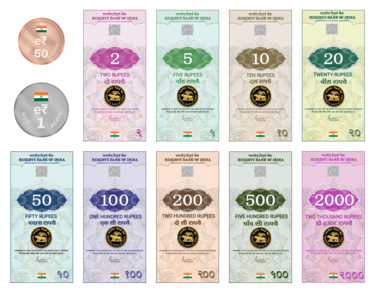 Indian Digital Rupee (digital rupee India price):- The Reserve Bank of India (RBI) will issue the Digital Rupee (e), also known as the e-INR or E-Rupee, a tokenized digital version of the Indian Rupee as a central bank digital currency (CBDC). The Digital Rupee, which was first proposed in January 2017, will go into effect during the fiscal year 2022–23. Digital Rupee makes use of blockchain technology with distributed ledgers.

Like banknotes, it will be able to be identified only by one person and will be governed by the Central Bank. RBI bears responsibility. The RBI will launch Digital Rupee for Wholesale (e-W) for financial institutions to facilitate interbank settlements and Digital Rupee for Retail (e-R) for consumer and business transactions. The implementation of the Digital Rupee aims to eliminate the 49,848,000,000,000 rupee security printing cost that was borne by the general public, businesses, banks, and RBI on physical currency.

A high-level inter-ministerial committee (IMC) on the governance and use of virtual currencies in India was established in 2017 under the Department of Economic Affairs in the Ministry of Finance (MoF). This committee recommended using Distributed Ledger Technology (DLT) to create a digital form of fiat currency. The Reserve Bank of India (RBI), the Ministry of Electronics and Information Technology (MeitY), and the Department of Financial Services of the MoF were all invited to form a special group to investigate CBDC’s technological and legal development. The RBI began planning for CBDC development in the future despite the absence of any official recognition of cryptocurrencies.

On December 16, 2020, the RBI announced a regulatory sandbox for testing next-generation technologies on cross-border payments in order to gather field test data and evidence of the financial ecosystem’s benefits and risks. The Indian government made a bill on January 29, 2021, that would give the Reserve Bank of India (RBI) legal authority to develop the Central Bank Digital Currency (CBDC), also known as the “programmable digital rupee,” based on its experience managing the Unified Payments Interface (UPI), Immediate Payment Service (IMPS), and Real-time Gross Settlement (RTGS) for distribution and validation purposes. This bill would prohibit trading and investments in cryptocurrencies.

CBDC backed by the sovereign must promote non-anonymity of monetary transactions and financial inclusion through direct transfers, according to the Currency and Finance Report of 2021 released by the RBI. It must adhere to national and international laws regarding economic terrorism and money laundering. The initial phase of CBDC trials was planned to begin in December 2021 RBI. However, it was moved to Q1 2022 prior to a phased nationwide rollout. According to Governor Shaktikanta Das, the RBI is still debating whether to use Distributed Ledger Technology or the centralized system. RBI has begun an internal evaluation of CBDC’s scope, legal framework, calibration, technology, distribution, and validation mechanism, citing an increase in digital transactions during the COVID-19 pandemic. The preliminary study will be conducted soon.

The Coinage Act of 2011, the Foreign Exchange Management Act (FEMA) of 1999, the Information Technology Act of 2000 and the Crypto-currency and Regulation of Official Digital Currency Bill of 2021 will all be amended by the Indian government to govern CBDC in the country.

On August 2, 2021, the Department of Financial Services, Ministry of Health and Family Welfare, and National Health Authority launched e-RUPI, a prepaid person-specific, purpose-specific e-voucher based on a QR code or SMS string that is leakproof and does not require a bank account. It will serve as a prelude by highlighting the deficiencies in the national digital payment infrastructure that must be addressed before CBDC’s nationwide launch. Nirmala Sitharaman from the Ministry of Finance made the announcement that the Digital Rupee would begin its rollout in 2023 at the Union Budget of India in 2022. The Digital Rupee can aid in currency management and cross-border payments, according to the International Monetary Fund, given the high volume of inbound remittances.

In 2022, the RBI began developing the CBDC framework. With CBDC-specific amendments to the Reserve Bank of India Act of 1934, Finance Bill 2022 was enacted. The pilot project will be run by the Reserve Bank Innovation Hub (RBIH) prior to launch. CBDC will be used for domestic and cross-border payment processing and settlement, according to the Payments Vision 2025 document that the RBI released on June 17, 2022. The RBI divided CBDC into two categories: wholesale CBDC, which will be traded among RBI, public sector, and private sector banks for the purpose of currency distribution and economic stability, and retail CBDC, which is intended to meet individual financial requirements. In addition, the RBI is looking into purpose-driven CBDC for Direct Benefit Transfer (DBT) in order to cut down on corruption and subsidy leakage.

RBI began consulting with FIS, State Bank of India, Punjab National Bank, Union Bank of India, and Bank of Baroda for the internal pilot project. A concept note was made public on October 5, 2022, by the Fintech Department of the RBI to raise awareness of CBDC and the features that will be included in the upcoming Digital Rupee (e). The Digital Rupee’s structure will be account-based or token-based. A CBDC based on tokens will behave similarly to real cash and be able to handle retail transactions. Account-based CBDC is thought to be suitable for wholesale transactions at the institutional level and is used for balance sheet maintenance. RBI is considering either a two-tier indirect model in which RBI issues CBDC to retail banks and financial service providers for wider circulation or a single-tier direct model in which the central bank maintains control over every aspect of CBDC, from account maintenance to transaction verification. Offline transaction support is also under consideration by RBI.

A user-defined password or a common public key will be used as a verification tool to complete the transfer in a token-based system, while a private key will be used to initiate the transfer. In accordance with the RBI, a bank account is not required for transactions because an e-wallet will be provided. Smaller transactions will remain anonymous, while larger ones will require self-disclosure in accordance with national and international laws on economic terrorism and money laundering.

e-R will not be a part of commercial banking systems, which can help reduce the concentration of liquidity and credit risks in payment systems that are mediated by commercial banks. According to the RBI, CBDC is not intended to replace existing payment systems but rather to provide users with an additional means of payment. CBDC’s goals are to promote and support the expanding digital economy, lower the cost of physical cash management, develop an effective payment system, and further expand financial inclusion. To build trust, safety, liquidity, settlement finality, and integrity, the Digital Rupee can be converted to paper currency without changing in value. The RBI will design the characteristics of the Digital Rupee to be closer to those of paper currency and seamlessly introduce it in order to reduce the risk associated with introducing new technology into currency circulation. The official launch could occur after March 31, 2023.

On November 1, 2022, the pilot project Digital Rupee for Wholesale (e-W) went live. It will be used to settle government securities transactions on the secondary market. It will assist in lowering the costs of the transaction and eliminate the requirement for settlement guarantee infrastructure or collateral to reduce settlement risk. The pilot project includes participation from the State Bank of India, Bank of Baroda, Union Bank of India, HDFC Bank, ICICI Bank, Kotak Mahindra Bank, Yes Bank, IDFC First Bank, and HSBC. On November 2, 2022, Shaktikanta Das made the announcement that Digital Rupee for Retail (e-R) would also begin a similar trial in the same month. Between 10,000 and 50,000 individuals will test e-R at each participating bank. The National Payments Corporation of India (NPCI) will manage the backend infrastructure while RBI will work with PayNearby and Bank to integrate CBDC as a payment option.

During the pilot project, RBI will also use Digital Rupee to conduct cross-border transactions. Digital Rupee was used by the RBI to settle secondary market transactions for 2.75 billion Indian rupees (or 33.29 million dollars) involving Indian government bonds on November 1, 2022. State Bank of India, ICICI Bank, Yes Bank, and IDFC First Bank will lead a pilot project for e-R in Mumbai, New Delhi, Bengaluru, and Bhubaneswar beginning on December 1, 2022. In Phase 2, Bank of Baroda, Union Bank of India, HDFC Bank, and Kotak Mahindra Bank will include Ahmedabad, Gangtok, Guwahati, Hyderabad, Indore, Kochi, Lucknow, Patna, and Shimla. e-R will support both P2P and P2M. We can use a QR code to make the payment. Small-value transactions will not be traced by banks once e-R is transferred to the individual wallet to preserve anonymity.

e-W closed an average of 3,250,000,000 deals per day in November 2022. The RBI created 30,000,000 worth of digital currencies over the first two days of the e-R pilot. In contrast to physical currency, e offers a recovery option in the event of a loss. During the e-R pilot phase, the RBI is evaluating particular use cases for P2P and P2M transactions. The use case for e in cross-border transactions at the institutional and individual levels is also planned to be expanded by the RBI. According to Pankaj Chaudhary, Minister of State for Finance, CBDC can be converted into bank deposits but will not earn any interest on its own. Additionally, he clarified that e-R makes use of Blockchain technology.

List of All Country and Indian Currency – Rupee for GK Notes